Giorgini Square (the foutain roundabout) and the Lighthouse 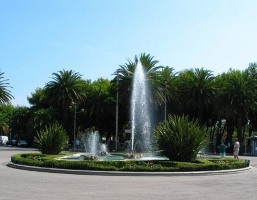 It is the midpoint of the sea promenade, a great project realized in the thirties.

Entitled to Carlo Giorgini, one of the most beloved mayors of the town, it was the midpoint of the new seapromenade, designed in the early 30's of the last century by Eng. Luigi Onorati, who had the idea of conceiving a great avenue, whose size was considered absolutely absurd at that time but today it represents the pride of the city. The avenue is divided into two parts: Viale Bruno Buozzi and Viale Trieste.

In the years, the area surrounding the Rotonda underwent a series of modifications and was enriched with villas in Art Nouveau style, hotels and a rich complex of sports facilities: tennis courts, bowls alleys, a skating track, but also a manège.

Today, the Rotonda with its central fountain and its prestigious surrounding area is one of the most impressive portion of the town, the city touristic symbol along with the nearby huge remarkable lighthouse. 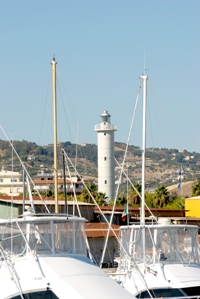 The lighthouse, located along the perpendicular line running from the 'old village' eastwards, began to work in 1957. It now replaces the sound of the bells of the old Gualtieri Tower that was once the reference point for seafarers sailing along this stretch of coast.

It's a necessary element to mariners and sailors for approaching to the coast in the dark night at sea. Before its construction, the reference points to sail back to the harbour were the Tower and the sound of its bells. That's why it has been built along the ideal perpendicular line from the "Old City" eastwards.

The Lighthouse of San Benedetto del Tronto now works automatically by a photocell which turns it on and off. At the time of its construction, the lighthouse used to work manually by daily recharging a weight-engine which made the wheelgear operate.

The Lighthouse of San Benedetto del Tronto has got a considerable importance for the entire middle Adriatic Marine because it is the only one which has a large broad reaching between Ancona and Ortona.