War memorial for the fallen for freedom 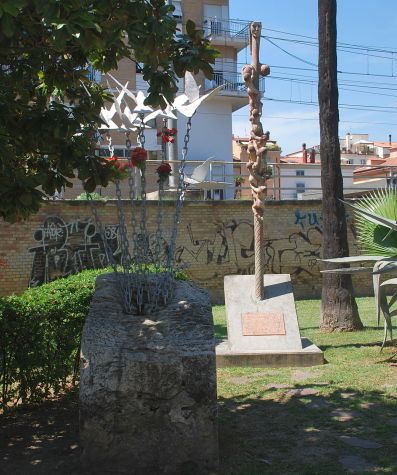 The two works by local sculptor Marcello Sgattoni are located in the central avenue Secondo Moretti in different eras. They both symbolize the yearning for freedom that inspired many young people who fought and gave their lives during the War of Liberation to build freedom and democracy in Italy.

The first work consists of a block of rough travertine marble on which the phrase "For the fallen for freedom" is engraved and from which depart several chains binding to the soil pigeons in the act of taking flight.

The second, realized more recently, represents the tree of life with a mother's body on which lots of small children hang, sucking the lifeblood of her breasts. Below, the phrase "The sacrifice of the martyrs quenches the thirst of people."

The work was produced with the assistance of the Rotary Club in collaboration with the Cassa di Risparmio di Ascoli Piceno.