Designed by the architect Ignazio Cantalamessa from Ascoli and built in 1870 onwards, the church was the religious point of reference for the inhabitants of the "Mandracchio," a group of fishermen houses along Via Laberinto behind the Church.

It contains the pictures of "Our Lady of the Rosary" by Andrea Tavernier, another painting the seventeenth-century "Flight into Egypt" (17th century) and the "Holy Family," a work by the greatest local painter, Armando Marchegiani.

The stained glass windows were made in 1988 (year of the last restoration) according to a design by the local artist Marcello Sgattoni.

The church, in neoclassical style, is decorated with brick elements. Its main door, adorned with gable and stone friezes, faces Piazza Matteotti, the former "Piazza d'Armi" (Weapons square), so called because it was the place where troops in transit used to stop.

The middle of the square is dominated by the artistic fountain made in 1870 on a design of the Roman architect Vespignani. 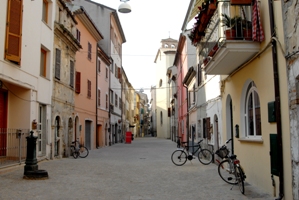 The square has recently been made even more attractive by a sculpture, ''The Dreamers'', by the local artist Paul Annibali, a hymn to hope and the life also in the most difficult situations.

Next to the fountain there's a big anchor (in memory of the ancient name of the street to the harbour, the way to the anchorage) and a statue "La Retara", dedicated to all those women who used to knit and repair fishing nets. Both works are in bronze and have been realized by sculptor Aldo Sergiacomo.