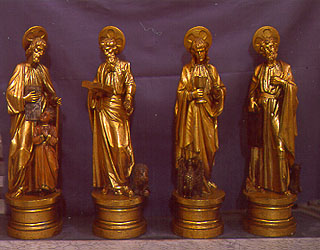 A rich collection of artworks from churches and private collections.

The museum site is located next to the cathedral-basilica of Santa Maria della Marina, the heart of diocesan life.

This exhibition recounts the story of the San Benedictine church from its beginning until today, putting on display some of the most important works relative to the oldest martyr saints of the diocesi and the two main places of worship of the city: the pieve of the martyr Saint Benedict and the church of Santa Maria della Marina.

Some ancient and precious vestments open the exposition: they were used in the past centuries to cover the body of the martyr Saint Basso, worshiped in the nearby town Cupra Marittima. Saint Basso legend is linked to that of the martyr Saint Benedict, for whom the town was named after and whose remains are still worshiped in the pieve that is dedicated to him in the old part of the town.

Some images of the saint and various furnishings from his church are exhibited in the second room. Among these objects there are statues of the Four Evangelists, refined works in golden carved wood from the XIX century.

In the present cathedral of Marina's Church, there is a wooden tabernacle created by the artist priest don Luigi Sciocchetti, who decorated also many important churches in the United States. In the same church there can be found the original sketches of the vast apse painting made by the Capuchin Ugolino da Belluno in 1993.

At the end of the tour there are works from a rich private collection of sacred art. The museum, situated in the old town near the Bishop residence, collects a rich variety of historically and artistically relevant sacred artworks.

Here we can find several examples of sacred sculpture coming from different locations together with works from the nearby Church of San Benedetto the martyr. This museum originated, mostly, from a rich private collection. In the museum you could admire a wood sculpture called "Ecce Homo" dating back to XVII century, the "Cristo flagellato" (The whipped Christ) a statue from the XVIII century and other saints statues made of wood, rock or ivory. Among the most important examples of jewelry dating from the end of the XIV century there are a stained cup and a metal processional cross.

In the sacred art museum there are also some objects produced by local artisans, such as the four Evangelists statues, refined wood carved works dating back to the XIX century, earlier housed in the Church of San Benedetto martyr.

The museum is part of the provincial network "Musei Sistini del Piceno". The network was born in 1998 and comprehends so far 10 museums that are widespread all over the province territory thanks to an agreement between the Diocesi of San Benedetto del Tronto - Ripatransone - Montalto, the Province of Ascoli Piceno and the local Administrations.

Annual opening is organized during Christmas, Easter and Summer season.

In the other periods, openings can be made on request calling the following telephone number: +39 347 3804444.

Eventi
There is no information